Looking back over my blog and photography archives I can see some patterns emerging with regards to the things I like to seek out and capture on my travels. Cake is definitely one of them, but just as voracious is my appetite for street art.

Over the years I have gained an obsession with colourful murals on unexpected walls and always seek to hunt them down on my travels. Many of the places I have been to are not only making a name for themselves because of their street art but it is drawing crowds to parts of the destination that may have previously been forgotten or ignored by a visitor.

Below I’ve put together a collection of some of my favourite street art photos from around the world along with a little note on how you can find these murals too. If you’re a fan of street art too, let me know where you have found some of your favourites in the comments below. I might have to make a visit there.

Melbourne is a name synonymous with street art, almost as much as it is coffee. Crowds flock to Degraves Street and Hosiers Lane to see the latest incarnation of the walls but my favourite spot is a hidden alley in Chinatown. Croft Alley, off Paynes Street, is a winding, vibrant dead end, mostly hidden from the main road. At the very end you will find the Croft Institute, a quirky bar loosely modelled on an old school science lab. I haven’t spent as much time in Sydney recently as I have Melbourne but I have heard rumours of a burgeoning laneway and cafe culture there (cue: Melburnians shouting ‘Copycats!’) I saw a glimpse of this in Surry Hills last year when I went in search of the fabled gelato of Messina (which is as good as they say) and spotted this little fella. He was so life-like I wanted to stroke him. (We all pat the dog)

I did a culture based press trip to Miami back in 2012 – not a word you usually hear associated with the destination. The most surprising element was a trip we took to the Wynwood Walls, an open-air exhibition of work by some of the best street artists in the world. Also in 2012 I visited Toronto to check out Fashion Week. Between catwalk shows and vintage shopping, I caught up with Toronto resident, ace blogger and my former colleague Alicia Taggio. She took me to Kensington to check out some of the quirky wall paint in the area, including this giant laptop we couldn’t help but blog on! 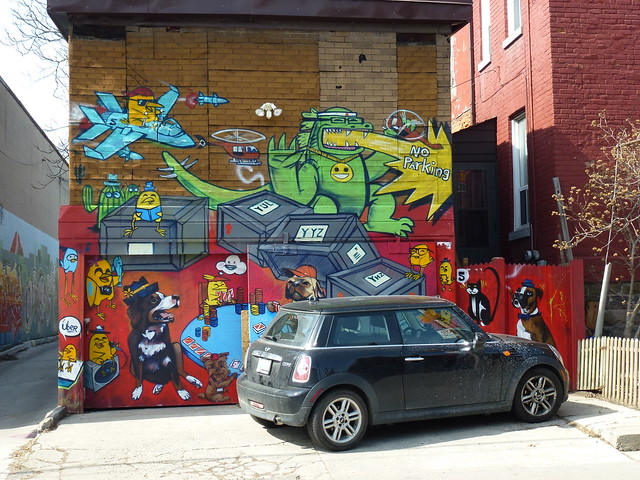 (Getting hands on with the street art in Kensington Toronto)

I returned to New York last year after a 7 year hiatus (way too long!) Since my last visit the High Line has opened, to much fanfare and praise, so I went to check it out for myself. The High Line, for those that haven’t heard, is a public park built on an historic freight rail line elevated above the streets of Manhattan’s West Side. It first opened in 2009 with an extension completed in 2011. During my visit it was a chilly Spring so there was not much in the way of plant life to admire but I did enjoy the artwork dotted along the route, particularly the giant kiss scene, and can appreciate what the park has done for this area of the city. 2013 saw my first visit to Germany (heaven knows why I had left it this long.) I was on the hunt for Youth Hotspots in Cologne and ended up wandering around the Belgian Quarter after sniffing out some coffee houses and burger bars. The street art is sporadic in this area but rather sweet and endearing when you spot it. Possibly the last place I expected to find an abundance of street art was on my trip to the Gambia last year. Through the Wide Open Walls project a team of artists from Europe, South Africa and Israel, in conjunction with village chiefs, have turned remote Gambian villages, like Galoya, into living art installations. Some of the skilled artwork is surprisingly dark and often obscure but it gives people a reason to visit these places many tourists will not see; it legitimises our being there and gives us a chance to make conversation with the people whose homes we are admiring. So I know my own city is bursting with street art, particularly around the east end, but for some reason I have not a single photo of any of it. (Bad blogger.) I’ve made a resolution to be a tourist in my own city and go out and capture some of the street art on camera. Just as soon as it stops raining…